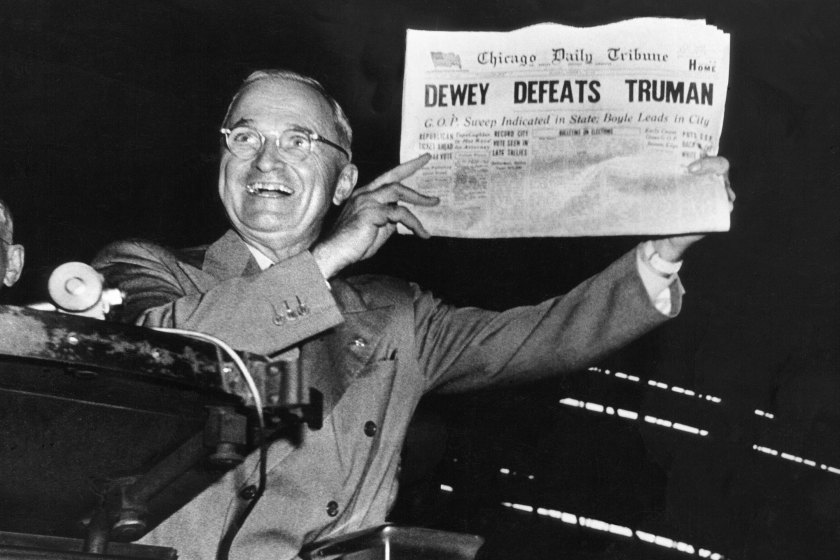 It’s been 72 years on November 2 since Harry Truman was elected the President of the United States. During the election in 1948 Truman already was the president but this was because of succession not election. Franklin D. Roosevelt died suddenly in 1945 and as a result Truman, who was the vice-president at that time, took over the office.

Truman didn’t have much popularity in American society at that time. Additionally, his own party – the Democratic Party – was internally conflicted. Thomas Dewey, the Governor of New York and candidate of the Republican Party, was the definite favourite of political commentators and research agencies forecasting the presidential election results. His lead over Truman in the election polls was so big that the research agencies resigned from the polls two weeks before the election assuming Dewey’s win was a foregone conclusion. Dewey’s team even started to arrange new staff of his office. On November 2, the election day, it seemed enough for hundreds of American newspapers to just wait for the official results before making public what had been unofficially known.

Editors of the republican „Chicago Daily Tribune” decided to start celebrating their candidate’s victory really early. Additionally there was a change in the printing technique so the newspaper bosses decided that printing the newspaper a few hours in advance would be a reasonable solution. Being late with the republican newspaper informing about the republican candidate victory would be definitely badly received by their readers. So as a result, the elections are still on, and also counting the electoral votes, when the first bundles of printed newspapers (out of planned 150 000 copies) with the date November 3 and the banner headline about Dewey’s win are being delivered from the printing house to newsmongers in Chicago.

Soon “Chicago Daily Tribune” editorial office receives an official statement… about Truman’s upset victory. The editors and other staff members rush out of the office in panic to get back the copies of the already delivered newspaper. With success… but at least a few hundred copies had already been sold. And probably everything would have been just a local sensation if a copy of that newspaper hadn’t landed up in… president-elect hands two days later.

Truman was returning by train from his house in Missouri to Washington and stopped in St. Louis in his home state to greet the crowds gathered at the station. Truman was standing on the rear platform of his train car when a member of the train crew approached and handed a copy of the newspaper found somewhere on the train. Truman read the headline with total amazement and after a while held the newspaper up for the photographers who were lucky enough to be there. In this way Chicago Daily Tribune of November 3 made its way to history.

The bosses of the research agencies had to face criticism after they were so wrong with their election polls. Months passed before they were able to regain their customers’ trust. Their mistake from 1948 is regarded as the biggest blunder in the history of social research. Elmo Roper, undoubtedly an authority among the researchers, also the owner of one of the research agencies which made the mistake in their forecasts, accepted hostility and antipathy with dignity. Asked what he felt when the election results were announced and he realised his mistake said: “My face was just as red as President Truman said it would be”.

What was the reason for such a huge mistake of the research agencies? Since 1930s and inventing the representative method by George Gallup research agencies predicted faultlessly the election results. Researchers in the 1920s and 1930s were even suspected of magic by some more suspicious voters. It seemed impossible to predict the election results in a country with a population of more than one hundred million (in 1940s) on the basis of opinions expressed by just a few thousand people!

In 1948 the researchers, who had been flawless in their predictions up till then, probably didn’t pay due attention to an unusually numerous group of undecided voters although such a group had been identified by prior polls. Truman addressed this particular group of voters in the final stage of his campaign, what later appeared to be a success. Since then public opinion researchers and political commentators have gained conviction that ‘undecided voters’, if nothing sensational happens in the last days of the campaign, finally tend to vote for the incumbent president or ruling party (social conformity) rather than vote for the opposition party or their candidate. This knowledge was probably the only positive outcome of the 1948 mistake.

The publishers of the unfortunate “Chicago Daily Tribune” were left with a sort of consolation though – it was their newspaper that appeared in the photographs that are now known to every American interested in politics. The lucky owners of the November 3, 1948 newspaper on the other hand can put their copies at internet auctions for a price ranging from a few hundred to a few thousand dollars. This has been undoubtedly one of the most successful investment decisions ever – the newspaper cost in 1948, as advertised in the heading, “FOUR CENTS. PAY NO MORE”.

This website uses cookies to improve your experience while you navigate through the website. Out of these, the cookies that are categorized as necessary are stored on your browser as they are essential for the working of basic functionalities of the website. We also use third-party cookies that help us analyze and understand how you use this website. These cookies will be stored in your browser only with your consent. You also have the option to opt-out of these cookies. But opting out of some of these cookies may affect your browsing experience.
Necessary Always Enabled
Necessary cookies are absolutely essential for the website to function properly. This category only includes cookies that ensures basic functionalities and security features of the website. These cookies do not store any personal information.
Non-necessary
Any cookies that may not be particularly necessary for the website to function and is used specifically to collect user personal data via analytics, ads, other embedded contents are termed as non-necessary cookies. It is mandatory to procure user consent prior to running these cookies on your website.
SAVE & ACCEPT